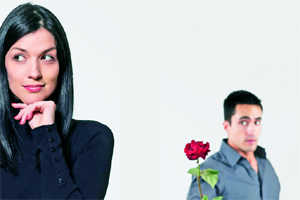 Indian Express – To find the answer, a growing body of research is focusing on the science of commitment. Scientists are studying everything from the biological factors that seem to influence marital stability to a person’s psychological response after flirting with a stranger.
Their findings suggest that while some people may be naturally more resistant to temptation, men and women can also train themselves to protect their relationships and raise their feelings of commitment.
Recent studies have raised questions about whether genetic factors may influence commitment and marital stability. Hasse Walum, a biologist at the Karolinska Institute in Sweden, studied 552 sets of twins to learn more about a gene related to the body’s regulation of the brain chemical vasopressin, a bonding hormone.
Over all, men who carried a variation in the gene were less likely to be married, and those who had wed were more likely to have had serious marital problems and unhappy wives. Among men who carried two copies of the gene variant, about a third had experienced a serious relationship crisis in the past year, double the number seen in the men who did not carry the variant.
Although the trait is often called the “fidelity gene,” Walum called that a misnomer: his research focused on marital stability, not faithfulness. “It’s difficult to use this information to predict any future behaviour in men,” he said.
While there may be genetic differences that influence commitment, other studies suggest that the brain can be trained to resist temptation.
A series of unusual studies led by John Lydon, a psychologist at McGill University in Montreal, have looked at how people in a committed relationship react in the face of temptation. In one study, highly committed married men and women were asked to rate the attractiveness of people of the opposite sex in a series of photos.
When they were attracted to someone who might threaten the relationship, they seemed to instinctively tell themselves, “He’s not so great.” “The more committed you are,” Dr Lydon said, “the less attractive you find other people who threaten your relationship.”
But some of the McGill research has shown gender differences in how we respond to a cheating threat. In a study of 300 heterosexual men and women, half the participants were primed for cheating by imagining a flirtatious conversation with someone they found attractive. The other half just imagined a routine encounter.
Other McGill studies confirmed differences in how men and women react to such threats. In one, attractive actors or actresses were brought in to flirt with study participants in a waiting room. Later, the participants were asked questions about their relationships, particularly how they would respond to a partner’s bad behaviour, like being late and forgetting to call.
Men who had just been flirting were less forgiving of the hypothetical bad behaviour, suggesting that the attractive actress had momentarily chipped away at their commitment. But women who had been flirting were more likely to be forgiving and to make excuses for the man, suggesting that their earlier flirting had triggered a protective response when discussing their relationship.
But it may not be feelings of love or loyalty that keep couples together. Instead, scientists speculate that your level of commitment may depend on how much a partner enhances your life and broadens your horizons— a concept that Arthur Aron, a psychologist and relationship researcher at Stony Brook University, calls “self-expansion.”
To measure this quality, couples are asked a series of questions: How much does your partner provide a source of exciting experiences? How much has knowing your partner made you a better person? How much do you see your partner as a way to expand your own capabilities?
The Stony Brook researchers conducted experiments using activities that stimulated self-expansion. Some couples were given mundane tasks, while others took part in a silly exercise in which they were tied together and asked to crawl on mats, pushing a foam cylinder with their heads. The study was rigged so the couples failed the time limit on the first two tries, but just barely made it on the third, resulting in much celebration.
Couples were given relationship tests before and after the experiment. Those who had taken part in the challenging activity posted greater increases in love and relationship satisfaction than those who had not experienced victory together. They theorize that couples who explore new places and try new things will tap into feelings of self-expansion, lifting their level of commitment.
“We enter relationships because the other person becomes part of ourselves, and that expands us,” Dr Aron said. “That’s why people who fall in love stay up all night talking and it feels really exciting. We think couples can get some of that back by doing challenging and exciting things together.”